Four families in England
You are here: Home 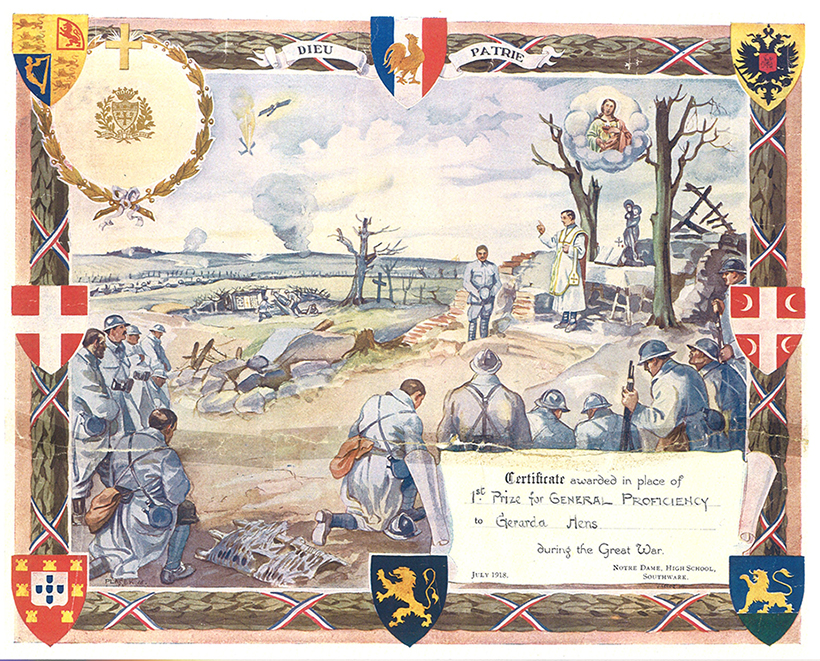 Only days before Storytelling Day (15 November 2015) at the Red Star Line Museum Marthe Hens and Karel Vangenechten found evidence of other relatives who had stayed in England during World War One. Still, many questions about their family history remain unanswered.

My grandmother Elisabeth Hens-Joosen was a widow with fifteen children. She could afford to have two nannies, as her family had made its fortune in the sugar industry in Antwerp.[1] Her sister Josephine Joosen and her husband Victor Reynen raised eight children. They had a nanny too. All of them – 29 persons – lived in Antwerp and planned to go to their country house in Essen (on the Dutch border) by train in early October 1914.[2] However, that proved to be difficult. So they were advised by the Antwerp authorities to travel to Vlissingen by boat and then turn back to Essen. But the Dutch authorities probably denied them entry into the country and they decided to head for England. It was said they eventually disembarked at Folkestone.

Aside from these two sisters, other relatives had also left for England, i.e. Frans Hens, the brother of the grandfather who had passed away ready, his wife Marie-Jeanne Giebens and probably six of their nine children. His two oldest sons Joseph (24) and Jean-Baptist (22) had enlisted in the Belgian army.[3] Frans-Jules (19) had probably fled to France. All in all – the three families: Hens-Joosen, Reynen-Joosen and Hens-Giebens – they numbered 37. However, they did not stay together. The sisters Joosen left with their families for Clifton, near Bristol, for unknown reasons. Frans Hens and his family ended up somewhere else. The Reynen-Joosen family moved four times. They stayed in Sittingbourne (Kent) and Bristol, among other places.

Elisabeth always stayed in the same spacious house in Clifton. It seems that she never got a job to earn a living. The family used to wear hats, but perhaps these had been offered to them. Having been well-off in Belgium, they possibly imitated people they considered to be their equals.

It is unclear where most of the children went to school. We know for sure that Elisabeth’s boys Joseph and Jules went to a Jesuit school in Hastings (St Leonards-on-Sea).They had attended a Jesuit school in Antwerp as well. Aunts Marthe and Josepha went to the Notre Dame High School in Southwark (London), i.e. a boarding school of the Congregration of Soeurs Notre Dame de Namur, perhaps following a recommendation by the Soeur de Notre Dame de Namur in Antwerp.[4] One of the diplomas they obtained in June 1918 showed a detailed scene at the frontline. Aunt Marthe’s marks were so high that she could actually go to the university; she did not, however, as she was probably obliged to look for a job. Aunt Gerarda, having finished primary school, ended up in the same High School. She received a certificate of the Royal Drawing Society in 1918.

The oldest family members, i.e. Maria, Liske, Madeleine and Marguerite, were forced to work in the weapon and ammunitions factories. Aunt Marthe, as we have already mentioned, had to look for a job as well, but it never became clear where she got one. The father of the Reynen-Joosen family was an insurance agent before the war. He had to start all over again in England and ended up penniless when returning to Belgium.

André Belpaire, the son of Gerarda Hens (the twin sister of the father of Marthe) and a distant relative of Marie Elisabeth Belpaire, possesses an extraordinary photo album about the stay in Bristol. The first pictures show two soldiers, probably the Hens brothers, who were at the frontline in 1914: Joseph Hens, Maria’s future husband, and Jan-Baptist Hens, who was killed in 1916. Members of the four families are featured throughout the album, in numerous locations and different combinations. Apparently, they must have travelled around a lot. One of the places they visited was Walthamstow (northeast of London). The album covers the years 1914 and 1915, so they must have met one another quite often.

Evidence of the fourth family that had stayed in England has only recently come to light. Elisabeth had three sisters and one of them was a widow too. Together with her three children, she had fled to England as well. More information about their stay is not available for the time being.

Imagine, four families and one husband.

Upon their return to Belgium, they went straight home, i.e. to the Ambtman Street. Their house had not suffered any damage, although we ignore if it had been looted or not

My father never spoke one word in English. Never. So many questions have remained unanswered. No contacts were maintained with people in England. And no stories were told. We ourselves have never visited Bristol, but a second cousin has and he told us that the house is still standing there, utterly unchanged.

Testimony by Marthe Hens. Thanks are due to Christophe Declercq, interview on Storytelling Day at the Red Star Line Museum (Antwerp)

[1]The Hens & Herssens company, today Kandijfabriek
[2]Antwerp was under German fire at the time, but it is unclear if they left because of that. Perhaps, the firing had not yet started.
[3]Jan-Baptist was killed at Diksmuide on 27 September 1916.
[4]The school had been founded by Belgian nuns in 1855.