Kampen family stays in Swansea
You are here: Home 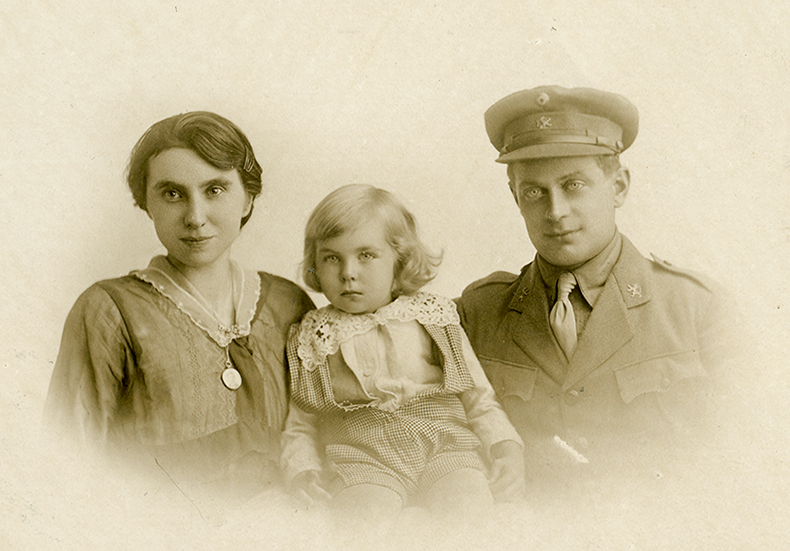 The Kampen grandparents fled to England in December 1914. They ended up in Swansea, where they stayed until 1926, possibly because my father attended a secondary school there.

My father Cornelius ‘Willy’ Kampen was born on 10 June 1914. When Antwerp was under fire from the Germans and about to fall, Cornelius was almost four months old. My grandfather, Alphonse Kampen, my grandmother, Marguerite Van Opdorp, and my father fled to the Netherlands in early October. We don’t know where they were lodged or with whom, but possibly it was in (the neighbourhood of) Roosendaal. As they did not (seem to) receive a friendly welcome in the Netherlands, they decided to travel to England. Permission to do so was given by the Belgian consulate in Roosendaal on 11 December 1914. It is unclear when and where exactly they boarded a ship for England, and when and where they disembarked. Strangely enough, former generations of this family came from Roosendaal, although this does not seem to bear any relationship to what happened during the war.

My father never told me anything about the war period, as he was a baby at that time. But the family archive did hold addresses referring to Swansea or places in the neighbourhood of Swansea. In that way we found the names of Evans & Rogers (1 Gloucester Place, Swansea), who seems to have been my grandfather’s employer and the people who provided accommodation for his family.

My grandfather was an interpreter. He spoke five languages. He was a clever man, although not a very pleasant chap. We never find out how he had managed to speak so many languages and what he did for a living before the war. Shortly after his arrival in Swansea, he started working as an interpreter for the Belgian miners there. He died in 1936, as a mustard gas victim. My grandmother, whose social skills were particularly well-developed, learned her neighbours how to bake a steak (instead of cooking the beef). Later, they ate the traditional Sunday roast, instead of the ‘Belgian’ roast. According to one item in the family archive, there were 132 Belgian women in Swansea. My grandfather joined the army on 12 March 1917 (my father was almost three years old). He served until 17 July 1919, while his family was in exile in Swansea. He was assigned to the Corps des Interprètes of the Belgian army because of his language skills, i.e. he maintained communication with the British army in the vicinity of Ieper (Passendale) and in Le Havre. Although he held the rank of (first) sergeant in the Belgian army, he found himself staying most of the time with the British army, behind or at the frontline. My father was a five-year-old boy when his father returned home from the war. He went to the Brynmill Boys School and finished primary school in 1926.

My grandparents returned to Belgium in 1926. My grandfather got a job at St Eduardus in Merksem, while my grandmother ran a tobacco shop in the same suburb of Antwerp. She must have learned to speak Welsh well, as she replied quite fluently when she welcomed a Welsh customer in her shop. She also used to bake a Welsh cake after her return to Belgium. However, they were not eager to talk about their stay in Swansea, nor did my grandfather talk a lot about his wartime experiences.

We went to Swansea three or four years ago, visiting the houses were they had stayed. They lived at High Swansea, a residential neighbourhood at the time. My father often talked about the Mumbles.